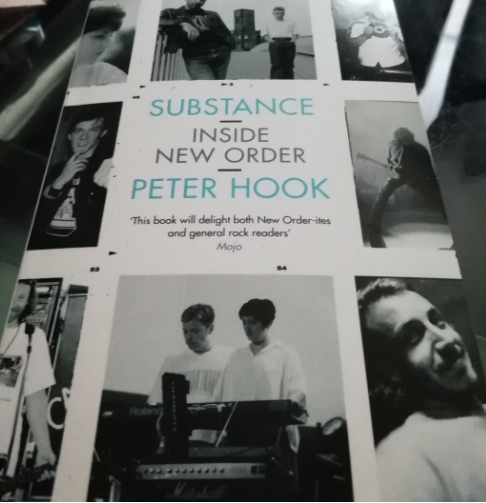 This is the story of the band New Order, as told by one of its founding members.

I went through a stage of liking New Order songs back in the early 90s (totally blows my mind to think of this as almost 30 years ago!) However, it was a passing phase. They did some great tunes, some not so good ones. They were hit and miss live and I actually couldn’t stand the bass player who seemed to ruin everything.

Later I would come to like the bass player (Peter Hook), even less as the press portrayed him as a wife-beating, rock ‘n’ roll hell-raiser who ruined a successful band.

This is a lesson in life. It’s easy to see the whole spectrum when you’ve been fed information filtered through a prism that only shows one colour.

The book tells the story of a band from Peter Hook’s (Hooky) point of view. It starts with original band, Joy Division, just after the troubled lead singer, Ian Curtis, takes his own life. The young musicians were in denial, they were inexperienced in life and just wanted to do what they loved—which was to make music.

The new band was formed, and through Hooky’s eyes we can see the pressures applied, from themselves, from family, financial worries, interfering managers, badly run record companies and business deals so steeped in conflict of interest that the band should have seen what was coming. Yet, they were driven by the music, the lifestyle and becoming cardboard cut-out clichéd rock stars.

Throughout the book, he is honest, which is what attracted me to it in the first place. The band have long since parted company with Hooky (he tells us that he left because of the friction with the lead singer and the rock ‘n’ roll lifestyle was one he no longer could be part of). However, Hooky, does praise his band members, even Barney (Bernard Sumner, the lead singer), calling him twatoo often, but occasionally praising his work ethic in the studio, his moments of genius and his talent. While his views on the lead singer are very clear, it seems more balanced that the other stories we hear.

So, why is this story important? We learn that an entire genre of music was heavily influence by the band, that a famous nightclub was created and owned by them (which spawned more innovation and acted as a catalyst for new bands, which then influenced artists of today).

Through the tales of substance abuse (nice title, Substance in New Order), alcohol addiction, reprehensible and immoral behaviour (fully admitted to by Hooky), we see a person who is vulnerable, who needs to feel wanted, who thrives on the energy of the crowd. Like a naughty school kid who simply can’t help himself, Hooky sows the seeds and eventually reaps the whirlwind.

The book is full of contradictions which (after reading 770 pages and feeling I know Hooky like my brother), shouldn’t surprise me. He talks about being clean and steering away from drink and drugs and a few pages later he’s deep in (without much transition between). He talks about being totally skint, yet he’s managed to find £7,000 a month from his own pocket to fund the nightclub and is never short of money to pay for his excessive lifestyle. He talks of hating the tension and the stress of working within the band, but when it’s taken away he struggles, and life becomes boring (as does the music). In many ways, poor Hooky can’t even see why this might drive his band-mates up the wall and while he acknowledges some of his failings, much blame is still levelled at others.

He’s no saint and he isn’t claiming to be. Some of the things he admits to doing would cause shame for his wife and kids and probably trouble him when he thinks on them too often, yet, there is a twinkle, a glint, like he’s on his death bed remembering the wild nights—and through all this you almost sense he’s trying to desperately convince himself that he wouldn’t go back to it all. If I  offered him a time machine for a day—I’m still not really not sure if he’d take it despite him trying to tell us he wouldn’t.

All in all, I learnt a lot. About the band, about the man, about the friction of working in such a close relationship for so long, about the music industry (goodness knows why there have not been more stories like their have been for Hollywood), about loss, the slippery slope into substance abuse, the striving for something more when your life is a whizzing past you at 100mph and you don’t even notice it slipping by, the dynamics of friendship, the cautionary tale of mixing business and pleasure.

Nuggets of wisdom? I learnt how to avoid the toilets when rock stars are in restaurants. I learnt that a stalker might, actually, just be your reflection and it’s pointless to pick a fight with it. I learnt that Bono doesn’t like bread rolls thrown at him. I learnt that you shouldn’t threaten a journalist before an interview starts. That certain parts of England were like war-zones in the 80s and 90s. That American women seemingly love English guys (according to Hooky, who brought to my mind hilarious scenes from the film Love, Actually (the film version was clearly done in jest)).

It was at times funny, so funny I couldn’t read it. At other times painful, frustrating and terrifying. It is fair to say it is not a book for the easily offended. But, for me, like all the best books (especially the long ones), you start and wonder how you’re going to finish something so heavy it causes you severe cramp to hold it. Then as the spine of the book expands and the pages pass by you don’t want it to stop and, in the end, you miss it and want more.

Just whatever you do, don’t ask for an encore!